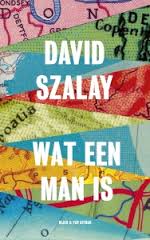 
The central question in your book is: what does it mean to be ‘a man’ in this current time?
That’s one of the central questions, I suppose, but I was equally concerned to write a book about time, ageing and transience, and it was really that concern that led me to the form of the book: the nine consecutive stories about progressively older men. I decided to make all the protagonists male to strengthen the sense that they were all in a way – not a literal way of course – all one person, or all living the same life. That wouldn’t quite have worked if there had been a mix of male and female characters. With all the central characters men, it then became inevitable, I suppose, that the book would also be about masculinity and about what it means to be a man at this point in history. (In fact, I originally wanted to call the book “In the Days of My Youth I Was Told What It Means To Be A Man” – a line from a Led Zeppelin song – but was unable to do so for copyright reasons.)

You’ve done this by telling 9 different stories. Do you think you have answered the central question through this approach?
As I said in my answer to the last question, the main aim of the 9 different stories was to create the impression of time passing, of a whole life elapsing, and I hope that in that it does succeed.

What is your favourite story? My personal favourite is the story of Balasz but that’s presumably because I’m a woman.
I don’t really have a favourite story, is the honest answer. I’m curious as to why you say that your favourite story is the third because you are a woman. That was, anyway, the first story to be written, and the only one that was written before the form of the book was clear in my mind.

Why have you chosen to situate each story in a European city that is not the residence of the main character?
As well and transience and masculinity, I wanted to write about contemporary Europe – and the particularly the extremely fluid nature of contemporary Europe, the unprecedented extent to which people are moving around the continent: to work, to do business, to live in other countries or simply on holiday. The last 20 years has seen a vast increase in this sort of movement. Now there is a political reaction against it. It is a phenomenon that I have experienced in my own life and observed in the lives of many people around me, and I wanted to write about it. (Another discarded title for the book was “Europa”.)

Is it true that Tony is the grandfather of Simon from the first story? Does this mean things have become full circle? Also of the seasons?
Yes, Tony is Simon’s grandfather and I very deliberately wanted to create a sense, at the end of the book, of things coming full circle – and yes, the progression of the seasons was part of that too.

The stories aren’t finished yet, one can speculate about the sequel, is there also a sequel with Aleksandr?
I have no plans to extend any of the stories – but then some of the characters from “ALL THAT MAN IS” are taken from earlier books of mine, and I did not foresee that that would happen either. Anyway, I think Aleksandr’s story is probably finished. I did write a description of him actually killing himself, but it was somehow too out of keeping with the rest of the book – too luridly dramatic, too explicit. So I cut it.

What would you recommend your female readers when they want to start reading your book?
Nothing in particular. Obviously I’m very happy that the book has been as well received by female readers as by male – I’m thinking of feedback I have had from reviewers, prize judges, publishers in other languages who have commissioned translations, and just friends and family. I would certainly reject the idea that it is a book particularly for male readers.

Is ‘All that man is’, a novel or a bundle of short stories?
It’s not a bundle of short stories – I’m very clear about that. Whether it’s a novel or not is obviously a slightly more difficult question: it lacks certain characteristics that a novel is supposed to have. What I would say is that I consider it a single, unified, fairly long work of prose fiction. Is that enough to make it novel? If not, I don’t know what it is.